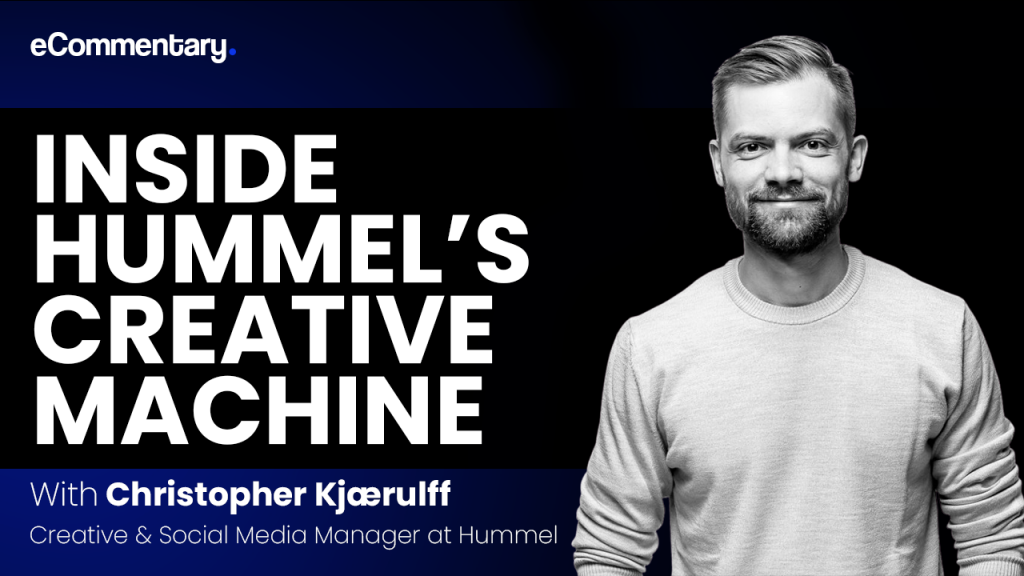 They spoke about all things digital marketing, including creative briefing, testing, and how Hummel has become one of the most high-profile brands in Denmark by working hard to truly understand its customers. Andy and Christopher also discussed their marketing predictions for 2023 and beyond. This episode is a must-listen if you’re looking to learn about what it takes to run a world-class marketing machine.

Christopher: “The brief is a chance for marketers to show that marketing is more than just flashing lights. The brief is where marketing can really show to the business that they understand that they are a function that yes, most often, we support. But we’re also business critical in the way that we can really help drive sales, we can help drive demand in the market. We show, we can understand the overall business strategy, because at the end of the day, whatever we do needs to be aligned with the business strategy.

I’ve seen so many briefs where the goal is to create content, but that’s just not a goal. In my mind. The goal is that we want to increase awareness in market X because we have this challenge, or we can see from our analysis that we were well known, we have the right positioning, but we’re just not translating that into two purchases. So we have to do something about consideration in this target audience. That’s where the brief is strong. It’s where we show the business that whatever we’re going to invest here is in direct support of our overall business strategy.

That’s something that we, as marketers, in my opinion, really need to start going back to understanding that it is about supporting the business, both short-term and long-term goals. It’s a sin of marketing when you say that the goal is to create assets because that’s not a goal to me, that’s the vessel that transport something, right? It may not necessarily be where you want to end up, you don’t want to end up just with content, you want that content to do something that’s beneficial to the brand.”

Andy: “Yeah. And that’s the danger. People only look at two points. They look at, “we need content, and we need sales.” They don’t understand that along that path to sales, there are so many other influences that need to be made.

For example, you mentioned that Hummel has incredible brand awareness in Denmark. So within a campaign, there may be sections of a category that you could expand if it’s a new range, but, in general, awareness is probably pretty good for Hummel. So then what you need to look at further down is, where in our customers’ journey, are we not performing? And sales are just the result. There’s something else that indicates, what’s going on there.

Andy: “How are you approaching the big change in marketing that is TikTok at Hummel?”

Christopher: “I’m responsible for the creative team. I’m also responsible for the social media team. And if you look at my career, I’ve worked predominantly in social media. And that’s where my creativity and my creative background stems from but I think that from a business perspective, obviously, you need to understand the new platforms out there.

But it’s also very much again, about making sure that whatever you choose to do aligns with the business goals and aligns with where you’re heading. We’ve definitely played around with Tiktok, we had a brilliant agency helping us out with it. And we’ve learned a tonne during six months on the platform.

It’s so interesting, I completely get the spring in your step that you’re referring to. It’s been a long time since a platform has caught me and caught my attention as TikTok has.

I feel like so many other people can just disappear and look up from the phone two hours later and go, “What the hell happened?!” And that’s because of that contagious algorithm. And it’s something from a very personal perspective, where it’s so much more fun to try and figure that algorithm out than trying to figure out Facebook’s algorithm. But I also think that there’s a little bit of novelty when you’ve worked with the old platforms for so long, that you were kind of in a place as a social media marketeer where you need to do your new fix.

We had Clubhouse come in and everybody was all about it. And we pretty quickly found out that that was a feature, not a brand. But I think it also TikTok hit or came at a point where we, from a social media perspective, needed an alternative to the established platforms. Going on there from a brand perspective means many marketing departments having to rethink the way that they’re structured, having to rethink brand personality and brand management and, really, truly for the first time living and letting go. It is a place where you can experiment, it’s a place where you can set yourself free. It’s a place where you can push that brand personality to its maximum, you can push the boundaries and move them.

I think that this is where we as marketing departments and marketing leaders need to understand that if we really want to be successful, it’s also opening up to a new generation of marketers that work in a different way that see brands and see media in a different light. We need to try and give them a little bit of that responsibility and wiggle room that a lot of us feel like we get to keep very close to us.

The cool thing about TikTok is that if it doesn’t work… Nobody will see it. That’s just how the algorithm works.

It’s taking it in a new direction, that’s an insight that you need to put into it. But again, I think that it’s very much also about taking a step to the background, as you know, more established leaders and in marketing, and saying, we need to let a new generation have the same opportunity that I had when I started out because back then nobody knew anything about Facebook. Nobody knew anything about Instagram, Twitter or LinkedIn. Well, that’s where I’m that 35-year-old marketer that I looked at 10 years ago and thought, you need to start playing on these platforms. And I think businesses today have to extend the same opportunity to young marketers.

Andy: “This is the thing that scares business leaders as well as that. They don’t understand that there’s a new generation. What we see with Gen Z is that they consume content in a different way, and they respond to different content. If your brand wants to be around in the next 20, 30, or 40 years, you’ve got to move with the times. Part of that is kind of letting go of some things. Even five years ago, posting up one of your team in branded clothing, dancing to the latest track or creating a joke from behind the scenes of a photo, might have been an interesting proposition. But if you want the reach, and you want the impressions and you want that new generation, that’s the personality that you have to show.

What does, admittedly, scare me slightly is the boundary. There’s the TikTok algorithm in itself which is designed for the grand, the extreme, the clickbait. The virality all comes from that. And I think that there’s always a danger that people become so obsessed with getting the most impressions possible that they behave in a way that’s beyond. And that’s, that’s the challenge of saying like, here’s our absolutes that like you can never put on a Hummel t-shirt and say “fuck” on TikTok, for example. I’m guessing that wouldn’t go down well. *Laughs*

Christopher: “I saw a relevant case on LinkedIn a while back to what you’re talking about. I hope I’m remembering it correctly. But it was the Danish Football Association and their social media manager had to tweak the way that they did content because they saw huge reach with the way that they had approached TikTok, but it was outside Denmark. It was Argentinians, it was people from Spain, it was Americans that were consuming these clips. But the things that they were sharing got enormous reach, but it was so outside of the Danish Football Association’s target audience. So, they had to rethink the content that they shared, to get lower reach and lower impressions, but actually hit their target audience.

Andy: They got caught up in it.

Christopher: Yes. You can get caught up in the virality of you. We see many brands doing this on Linkedin and posting, “Oh we made this video and it got 44 million impressions.” Sure, on the face of it, that’s brilliant. But what’s underneath the surface? Who did you actually talk to in your target audience?

I also think with TikTok that we are seeing a lot of people falling back on old ways. One of the things with the algorithm that was discussed in the early days was obviously this thing that followers don’t matter to the same extent that they did on Facebook and Instagram in the early days. But you still see a lot of people and brands and agencies falling prey for you know those vanity metrics. I’m actually not that fond of the phrase “vanity metrics” but it serves me well right now.

Sure, you’ve got 100,000 followers on Tiktok. But is that the goal? Does it do anything for your business? What is it that you’re trying to achieve? Who is it you want to talk to?

How can you actually use Tik Tok as part of the marketing mix that pushes the brand in the right direction? I think that that’s always that always has to be the question that we ask ourselves when we start up with new platforms and start producing content.”

Looking for the full episode? Check out eCommentary here or wherever you get your podcasts.